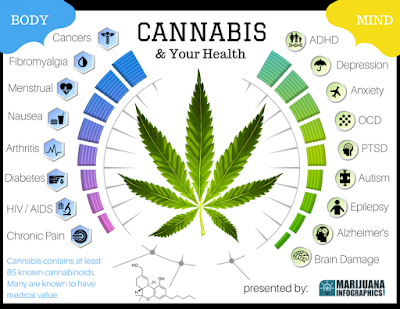 What is medical marijuana?

Medical marijuana uses the marijuana plant or chemicals in it to treat diseases or conditions. It's basically the same product as recreational marijuana, but it's taken for medical purposes.

The marijuana plant contains more than 100 different chemicals called cannabinoids. Each one has a different effect on the body. Delta-9-tetrahydrocannabinol (THC) and cannabidiol (CBD) are the main chemicals used in medicine. THC also produces the "high" people feel when they smoke marijuana or eat foods containing it.
What is medical marijuana used for?

Medical Marijuana: What Does It Treat?

Medical marijuana is used to treat a number of different conditions, including:

But it’s not yet proven to help many of these conditions, with a few exceptions, Bonn-Miller says.

"The greatest amount of evidence for the therapeutic effects of cannabis relate to its ability to reduce chronic pain, nausea and vomiting due to chemotherapy, and spasticity [tight or stiff muscles] from MS," Bonn-Miller says.

How does it help?

Cannabinoids -- the active chemicals in medical marijuana -- are similar to chemicals the body makes that are involved in appetite, memory, movement, and pain.

Research suggests cannabinoids might:
Medical marijuana received a lot of attention a few years ago when parents said that a special form of the drug helped control seizures in their children. The FDA recently approved Epidiolex, which is made from CBD, as a therapy for people with very severe or hard-to-treat seizures. In studies, some people had a dramatic drop in seizures after taking this drug.

Medical marijuana is legal in 33 states and the District of Columbia:
Alaska

States that allow restricted use only include: Alabama, Georgia, Iowa, Kentucky, Mississippi, Missouri, North Carolina,South Carolina, Virginia, Wisconsin and Wyoming.
How do you get medical marijuana?

To take medical marijuana, you can:

How you take it is up to you. Each method works differently in your body. "If you smoke or vaporize cannabis, you feel the effects very quickly," Bonn-Miller says. "If you eat it, it takes significantly longer. It can take 1 to 2 hours to experience the effects from edible products."

Has the FDA approved medical marijuana?

The FDA has approved two man-made cannabinoid medicines -- dronabinol (Marinol, Syndros) and nabilone (Cesamet) -- to treat nausea and vomiting from chemotherapy. The cannabidiol Epidiolex was approved in 2018 for treating seizures associated with two rare and severe forms of epilepsy, Lennox-Gastaut syndrome and Dravet syndrome.

What are the side effects of medical marijuana?

Side effects that have been reported include:
The drug can also affect judgment and coordination, which could lead to accidents and injuries. When used during the teenage years when the brain is still developing, marijuana might affect IQ and mental function.

This is part of an article which appeared in WebMD. We recommend them to our readers, for more information on this topic.