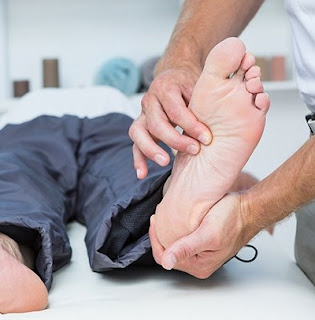 Buddy Talley of North Carolina: Neuropathy of the Feet
Buddy is 86 years old. He started in the tobacco business when he was 17. He didn’t retire until he was 73. A buyer for Kent, Newport and Old Gold, the fast paced, highly competitive world of a tobacco broker was the driving force for most of his life.
Buddy has outlived his wife by eighteen years. Now it’s just him and his son Tom. Tom is Buddy’s caregiver, now. Tom is also chronically ill.
Buddy has been suffering with Neuropathy of the feet for twenty years. He said that it feels like nails piercing the bottom of his feet. ” I jus’ never had anything in my life to hurt like this.”
Neuropathy encompasses more than 100 diseases and conditions affecting the peripheral nerves-the motor, sensory and autonomic nerves that connect the spinal cord to muscles, skin and internal organs. It usually affects the hands and feet, causing weakness, numbness, tingling and pain.
Buddy is a veteran. He served four years during World War II. He was told that it was probably the long walks packing heavy equipment that lead to his feet problems.
Two recent scientific studies (Headline from 2007) have confirmed what Buddy has found (that conventional narcotics don’t work for his condition) and what he has been told (that Cannabis is effective for Neuropathic foot pain).
A video from the 2004 Cannabis Therapeutics Conference, hosted by Patients Out of Time, features Dr. Donald Abrams, who conducted one of the studies in San Francisco, explaining the protocols for this government sanctioned research.


Buddy also has Rheumatoid Arthritis. He’s been ailing with it for 12 years. The stiffness in Buddy’s joints confines him to his easy chair and has hopelessly shackled him to pharmaceuticals. He had to elevate his legs to make it through our interview.
Buddy has skin cancer across the top of his head and down his back. Squamous Cell Carcinoma is one of several colored cancerous lesions visible on the surface of his bare scalp.
Buddy told me that most times, he’d rather be dead. He quickly adds that he won’t kill himself, but, “…I’d rather be dead.” The pain he deals with is that intense.
Over a decade of chronic illness and inefficiently treating it with prescriptions drugs has lead him to this point. There must be something else. For Buddy, even the thought of dying is a welcomed relief when faced with the ever growing pain he is experiencing.
Buddy and his son Tom are avid readers. That’s evident from the stacks of books that fill their home. Decades of captivity to their illnesses have honed their ability to research. It is that energy that they focused on finding relief from the pain and discomfort they both experience.
Though conventional medicine fell short of a solution, one 4,000 year old medicinal herb continually surfaced in their study. Cannabis. From what they read, studies had shown that it not only could relieve pain and was a natural anti-inflammatory, but could also be used to increase the effectiveness of conventional medicine so that they could minimize the damage that opiates can cause to their livers and gastro-intestinal tract.
Buddy and Tom don’t want to break the law. They don’t want to live out the rest of their lives in excruciating misery, either. Buddy says his state legislator won’t listen to him because he’s a Democrat.
It seems all too many of our elected officials are out of touch with the chronically ill. They steer clear of the controversial issues like cannabis, even when they know that millions of Americans could benefit from this holistic medicine.
What’s it going to take? A hundred testimonies like this? A thousand? Just how many more chronically ill Americans must face the fear and indignity of prosecution, even as their very lives are in peril from disease or critical injury.