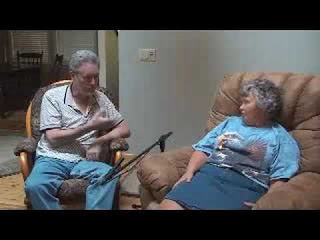 Brenda L. of Ohio: Breast Cancer
“Eight years ago, Brenda was diagnosed with breast cancer. It was in stage I when they found it. She underwent the lumpectomy and sentinel node biopsy.
A lumpectomy is where just the tumor is removed as well as the normal breast tissue that closely surrounds the tumor. Sentinel node refers to the first lymph node(s) that drains from the breast tumor area (found by injecting a radioactive dye).
“They shoot radiation into your breast and they follow it up to the nodes to make sure that you don’t have cancer in your lymph nodes. And I did not, so all I had to have was radiation…and hormone therapy. Because my cancer was fed by the estrogen.”
Tamoxifen is used to treat certain types of breast cancer that require estrogen to grow. It’s often used following surgery and radiation. (Drugs.com can provide more information on this line of treatment.)
“That’s the drug from Hell, too…the hot flashes were like a hundred times worse. I mean you just break out into a sweat all over. For no reason. I mean 25, 30 times a day. And the radiation…it was..I don’t know…it was a weakening. It didn’t hurt. It was completely painless. You wonder, what are they shooting through your body? But you…can’t feel it. But you can afterwards.”


Brenda still has scars from the over-spray of the radiation, now, eight years later. It burned her skin. Brenda was lucky that she’s dark skinned. After the treatment, “…they were surprised because they said, most of the time, the skin peels away. But I’m part Indian. They said I did very well.”
One of her breasts is bigger than the other because of the effects of the radiation.
“After the radiation, it left you very drained. And, so nauseous, you didn’t even want to think about food.”
Brenda had heard that cannabis was good for treating the nausea following cancer therapy. So she tried it. “And I could eat my dinner.”
Maintaining a consistent weight was important. The wasting that follows this kind of treatment can kill just as easily as the cancer it’s self.
Brenda underwent thirty-five days of radiation. “Boom, boom, boom.” That’s the deliberate way the treatments went. Then, another type of radiation. “They gave me two different kinds.”
“If I hadn’t had the cannabis to get through the nauseousness, I would have lost weight and, I don’t know, who knows what would have happened.”
“Cannabis gives me a lift. It doesn’t lay me back or anything. I want to do things, and it gave me energy that I didn’t have at that time. I could eat. That was the important thing.”
Since she smoked her cannabis, she did have some respiratory irritation, but that was minimal and could have been remedied if she would have known about vaporizers.
Brenda also suffers from arthritis in her knee and in her hip. In addition, she has chronic pain in her feet and has had surgery in both of them.
“…I get around real well. Fifty-seven and I still mow the grass. I usually smoke cannabis before I do. It kind of lessens the pain and keeps me going.”
The anti-inflammatory benefit of cannabis helps her with her arthritic pain. “It takes your mind away; away from your pain.”
Brenda sums up her feelings about cannabis by saying, “They should let people grow their own medicine if they want to. And it would be so easy. So easy for somebody. Plant a little seed. Get some medicine.”