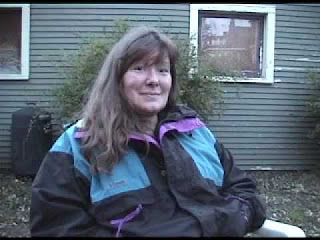 Beth Wilkinson of Kansas: Epilepsy
Beth is originally from Cedar Rapids, Iowa. That’s where she grew up. She got her degree from the University of Northern Iowa. She has a degree in Art Education.
Currently Beth lives in Lawrence, Kansas. It’s turned out to be a really nice place for her and her family to live.
In 1986, Beth was riding horses with a friend. Her horse fell on her and she suffered a TBI, (traumatic brain injury), which landed her in a coma for over a week.
When she came out of the coma, she had to learn everything all over again. Her son was two years old then. “ …so, we basically grew up together.”
She didn’t have any further complications from her injury for years. She finished up her degree and she later moved to Minnesota. But it was there that she began experiencing seizures and black outs.
So she had to start seeing a Neurologist. She was put on Dilantin and stayed on it for years.
After moving back to Cedar Rapids, she started having the seizures once, maybe twice a year. Following her move to Kansas in ’98, she started having them two or three times a month. Those seizures were called Grand Mal’s, or, their current term, Tonic-Clonic seizures.


“You end up biting your tongue quite a bit, and, it’s real difficult to speak for a long time afterward…and hard to think…”
They did a VNS (Vegus nerve stimulation) implant on Beth. Wikipedia describes this apparatus as such: A VNS implant is a stimulator that sends electric impulses to the left Vagus nerve in the neck via a lead wire implanted under the skin. The device consists of a titanium-encased generator about the size of a pocket watch with a lithium battery to fuel the generator, a lead wire system with electrodes, and an anchor tether to secure leads to the Vagus nerve.
“It gives electrical shocks to your nervous system, because that’s what basically epilepsy turns into is a nerve disorder…that little motor is like a pacemaker. It triggers off every 30 seconds. So if you hear my voice change, that’s probably when that little motor is going off.” She chuckles.
Truth be known, several times during the interview I noticed her speech briefly pause and her eyelids flutter.
“You carry a little magnet with you and if you’re feeling something coming on, like a seizure, you’ll stick that into your system up here on your shoulder.” Beth touches her left shoulder.
“I don’t always know when it’s happening, because it’s been recently, within the last month when I had one at the library. And, um, you know, I was out more than an hour. And ended up in the emergency room. So…it’s really awful. You don’t really know what’s going on when that happens.”
They’ve tried a lot of medications on Beth. Moving her from drug to drug. “Dozens…dozens.”
One of the side effects is that she now weighs forty to fifty pounds more because of the pharmaceuticals. The drugs have made her lethargic and she can’t think as clearly. “When you’re on all the medicine that they (the doctors) prescribe you just can’t be as active.”
Finally, she got to the point where she didn’t want to take just another drug for her migraines, so she tried cannabis. She had used cannabis recreationally when she was younger.
“That was the most functional, practical thing for me to do, because it didn’t conflict with all the medicines I was on.”
Beth’s doctor approves of her using cannabis to offset her symptoms. So much so that she is willing to write a letter stating so.
Beth also believes that cannabis is helping her seizures. “…it feels like the sides of my brain are relaxing.”
She believes that if cannabis would have been available to her earlier on, things might have been different. “I might still be driving, because that’s one of my restrictions. I wouldn’t have wrecked all my cars.” She chuckles, then looks down, “I hate that.”
Beth’s illness has dramatically disrupted her life. Speaking seriously, “It’s embarrassing. I mean embarrassing when you end up in the emergency room to the same nurse and doctor that you’ve seen numerous times.”
None of the doctors in Lawrence will see Beth because of all her seizures. That’s a hardship, because now she must travel out of town to see a doctor.
She’s also fearful about what the prescription drugs are doing to her body. “And here I have got this little motor going off in me all the time so I’ve got to deal with that too.”
So Beth waits, for a day when her suffering will end, or at least, ease – A time when her safest, most effective medicine will be legally and openly available to her. A time when she will no longer have to hide the fact that she uses cannabis or depend on artificial devises to stem off the traumatic effects of her seizures.