Cannabinoid receptors, located throughout the body, are part of the endocannabinoid system, which is involved in a variety of physiological processes including appetite, pain-sensation, mood, and memory.

There are currently two known subtypes of cannabinoid receptors, termed CB1 and CB2. The CB1 receptor is expressed mainly in the brain (central nervous system or "CNS"), but also in the lungs, liver and kidneys. The CB2 receptor is expressed mainly in the immune system and in hematopoietic cells. Mounting evidence suggests that there are novel cannabinoid receptors that is, non-CB1 and non-CB2, which are expressed in endothelial cells and in the CNS. In 2007, the binding of several cannabinoids to the G protein-coupled receptor GPR55 in the brain was described.

The protein sequences of CB1 and CB2 receptors are about 44% similar. When only the transmembrane regions of the receptors are considered, amino acid similarity between the two receptor subtypes is approximately 68%. In addition, minor variations in each receptor have been identified. Cannabinoids bind reversibly and stereo-selectively to the cannabinoid receptors. Subtype selective cannabinoids have been developed which theoretically may have advantages for treatment of certain diseases such as obesity. 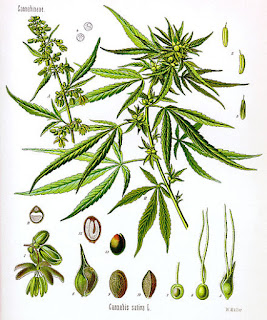 Read more on the ECS, including the ways that CB1 & CB2 receptors effect human health.
Wikipedia contributors developed the content of this article.
Wikipedia has an entire series of articles on Cannabis.